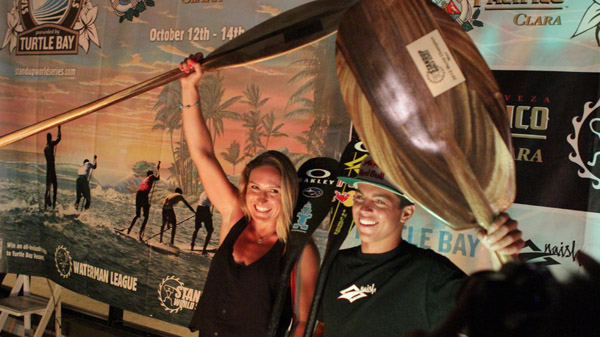 It was a picture perfect day here at Turtle Bay Resort today, as light winds and a solid WNW swell provided the most spectacular conditions imaginable for the Final day of action for both the Stand Up World Series Finals at Turtle Bay, but also the 2013 World Championship Season. The scene was set for the conclusion of a World Title Race that has kept the world on their toes throughout the 2013 Season, as 2 young athletes from Maui battled it out, race by race, country by country towards the elusive World Championship Crown. Connor Baxter (Starboard) and Kai Lenny (Naish), number one and two respectively coming into this final day of action grew up together and now are the 2 leading lights in the sport of stand up paddling and put on a spectacle today for the ages, as was anticipated. Both athletes made it all the way to the Final and as the calculations were made, it was determined that If Connor Baxter finished in 5th or better in the Final (out of 8), then he would have secure the World Championship Crown for 2013. As the athletes embarked on the 2 lap course, a flurry of sets came through providing the most spectacular racing of the day, right when we needed it most: the result – some of the most intense racing ever witnessed in solid surf, and Kai Lenny achieving the unthinkable, winning the World Series Sprints, with Connor having a disappointing final to finish in 7th, thereby allowing the young Champion from Maui, Kai Lenny, 2012 World Champion, to defend his World Championship Crown in the dying minutes of the 2013 season. A big congratulations go out to both these incredible athletes and stay tuned to www.watermanleague.com for highlights, look backs and much more from this historic event on Oahu’s fabled North Shore.

The other big story of the day was the young Australian Jake Jensen (Fanatic) securing the event win with a 3rd in the sprints, which combined with his win in the long distance making him untouchable. This incredible performance from Jake boosts him into 3rd overall for the year.

In the women’s fleet, it was Mariko Strickland (Naish) from Kauai who took the overall event win, with a second in the sprints and a win in the long distance. In second, Angela Jackson (Fanatic) from Australia made her presence felt, finishing in 3rd for the event and securing her second place overall for the 2013 Season. In 2nd place at the World Series Finals and securing 3rd place overall for the year, it was the French talent, Olivia Piana (Fanatic) who came through to take the win in the sprints to compliment her 3rd place in the long distance.

The World Title however goes to Annabel Anderson (Starboard) from New Zealand, who despite being unable to compete at the World Series Finals due to injury, had done enough through the year to secure her second World Title, and was present here fo the close of the season to claim her World Championship crown.

All in all, an incredible end to an incredible event and a phenomenal year for the Stand UP World Series, as we took the world’s best to all four corners of the world for an unforgettable year of action and moments. Stay tuned to www.watemanleague.com for highlights, galleries, recaps and much more.