THE PASSING OF A LEGEND 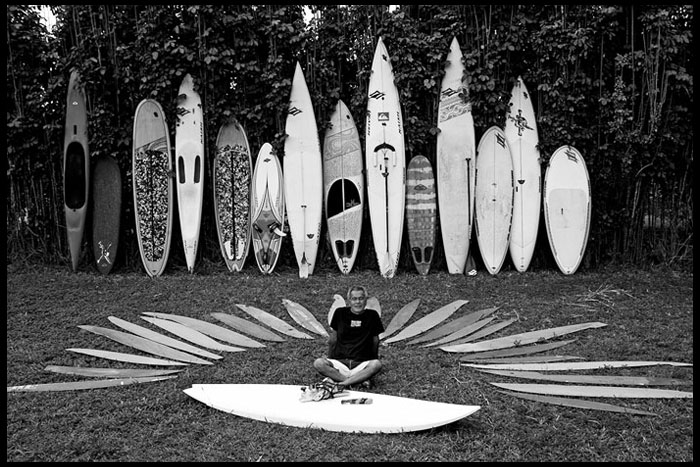 Our world was rocked this week with the news that Harold Iggy, my dear friend and shaper for over thirty years had passed away from a heart attack while standup paddling in Kailua Bay.  His sudden death came as a shock to us all.   Harold was one of the purest, most humble, fittest, and seemingly healthiest men of any age that I have ever known.

For those lucky enough to have known him, Harold Iggy was a very unique and inspiring man.  He loved shaping boards with all of his heart.  Harold had been making and riding boards of every shape and size basically his entire life, and did so with total commitment and passion.  He shaped with curiosity, an open mind, and a constant desire to improve and discover.  He shaped because he loved it.  Whether a shortboard, longboard, windsurfing wave or race board, paddleboard, standup short board or eighteen footer, Harold crafted and rode them all.  Harold Iggy was THE master shaper in every sense of the word, and a true waterman.  His eye, his hands, his feeling for curves and what they ultimately came together to do…and his magical ability to turn a block of foam into a functional work of art was legendary.

His skills and dedication aside, he was simply one of the nicest human beings that ever lived.  He had so much to teach, so much to share, and so many amazing stories.  He was soft spoken with a wealth of knowledge, and he never had a bad word to say about anyone or anything.  If there is a heaven, you can be sure that Harold was welcomed like few men before him.

Harold’s passing will leave a void in many hearts and many lives.  Our thoughts and prayers go out to his beautiful wife, Susan, his two daughters, and his grandson.  I feel blessed to have been able to call him a friend, and I’ll cherish my memories and all that he taught me forever.  Harold passed away doing what he loved.  He was in the ocean, riding a wave on his latest masterpiece.  May he RIP for eternity, and may his legacy live on through the people whose lives he touched and through the tens of thousands of boards around the world that came from his hands.

I will miss you Harold.