The North Shore Paddle Challenge at Turtle Bay Resort proved to be a groundbreaking event for the sport of Stand Up Paddle racing, as the foundations have now clearly been set for the 2012 Stand Up World Series.

With 17 WQS events in 14 countries culminating in the prestigious World Championship final to take place right here at Turtle Bay Resort in October of 2012, the Stand Up World Series will now kick of at the Namotu World Paddle Challenge presented by Air Pacific, next month in Fiji.

In an epic weekend of racing at the North Shore Paddle Challenge at Turtle Bay Resort, Naish’s Kai Lenny clinched the overall Title of North Shore Paddle Champion for 2011, clearly making a statement as far as his contention for a 2012 Racing World Title to compliment his current Surfing Title.

Racing on the Stock 12’6 class that will be the standard for all Stand Up World Series WQS races, Kai finished in 2nd place in both the Sprint and Long Distance Races

Zane Schweitzer dominates in the surf racing at Turtle Bay

Starboard’s Zane Schweitzer proved that he was not only a force to be reckoned with in racing, but that in any kind of surf racing, he has the skill, surf riding skills and physical condition of a true Champion as he dominated all his heats to win the Sprint course at Turtle Bay Resort.

Overall Champion Kai and Zane were battling it out for the lead through the first lap, and as Kai Lenny chose the inside line, getting caught on the buoy, Zane capitalized and increased his lead to take victory. Congratulations to this young Champion!
Andrew Logreco wins the Turtle Bay to Haleiwa downwind 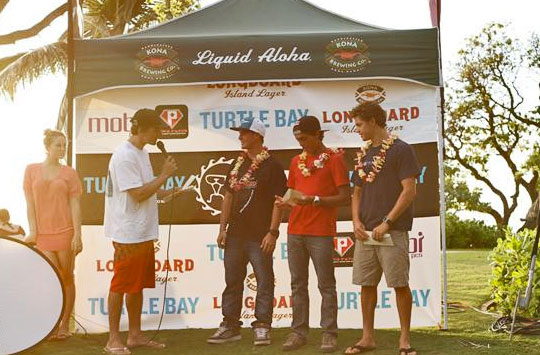 The Women step up at the North Shore Paddle Challenge

In the women’s division, Rachel Bruntsch and Mariko Strickland dominated both sprint and long distance races in the stock 12’6 division, with Mariko winning the sprint race and Rachel the Long distance. This gave them a tie for the Overall Title, as both women share the Title of North Shore Paddle Champions.

In the 14′ class, Halie Harrison stormed to victory ahead of Laura Birse. Great performances from all our women competitors at this prestigious and inaugural North Shore Paddle Challenge.