This is the second consecutive World Championship for Naish production boards. 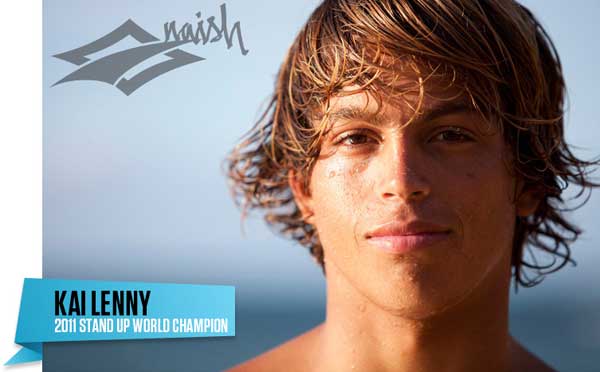 As the final horn blew this morning, announcing the end of the Maresias Pro in Brazil, it was official: Kai Lenny is the 2011 Stand Up World Tour Champion.
In an intense final heat with Brazilian surfer, Leco Salazar, Kai surfed with signature style, combining smooth flow with progressive maneuvers, punctuated by some sick arials in the shorebreak.
Naish is so thrilled for Kai, who we have supported throughout his career, and we are stoked to see all his hard work and dedication pay off. Kai has been an integral part of the development of the Naish Hokua series of shortboard-style wave boards. Along with Master Shaper Harold Iggy, Robby Naish and SUP brand manager, Michi Schweiger, Kai’s input and progressive surf style has helped shape his championship-winning boards: the Hokua 8’0″ and the Hokua 9’8″ Gun.
The Hokua series of boards have all been crafted with this same surf performance in mind, and come in a variety of sizes to suit the rider’s weight and skill level. Loose, fast and curvy, the boards combine a single-concave in the nose with a double-concave center section, leading into an accelerated vee out the tail. The increased tail kick allows these shapes to release off the top effortlessly, while the center vee section keeps the boards loose rail to rail and easy to bottom turn. Unlike many other boards, the Hokua’s rocker doesn’t require you to shift your body weight excessively front to rear, resulting in smooth transitions and turns – Kai’s signature flow! For heavier riders, the same ease and kick can be achieved with the Hokua 8’5″, Hokua 9’0″ and Hokua 9’5″.
With one final event remaining in the Stand Up World Tour, we can’t wait to see the show Kai will put on in the Hawaii Islands Final in November. Congratulations Kai!