Today’s competition covered the gamut from serious surfing and speed-sprint courses to a little SUPZilla tomfoolery (pictured at bottom) thrown in for good record-setting measure.

World class SUP racer Connor Baxter sliced and diced the sprint field; Alika Willis posted a heart-warming surf win; and a hearty workout was had by all aboard the world’s largest SUP board ‘SUPZilla’ as it engulfed the Queens Surf lineup en-route to posting an unofficial world title: Most surfers to ride a wave on one SUP board – 15.

But hype and hilarity aside, the day belonged to Alika Willis, who demonstrated how a passion for the ocean can change your life – something Duke Kahanamoku effectively shared with the world.

Willis entered his first SUP competition at Duke’s OceanFest two years ago. He came close to last, but won the prestigious C4 Waterman “Spirit of Duke” Award for sportsmanship and heart.

Rival competitor and fellow-finalist Kalani Vierra knew how hard Willis had worked for it, however, having helped him to train, focus and shed the pounds leading up to today’s events.

“Quit soda, quit mayonnaise, quit ketchup,” said Willis, speaking of some of his secrets to success. “I gave myself a chance to get healthy and get competitive.

“I never knew Duke but I remember being three years old and being at his funeral. He was aloha. The aloha spirit is very important because it brings camaraderie and sportsmanship to the sport and helps it to grow. Duke Kahanamoku was just like that.” 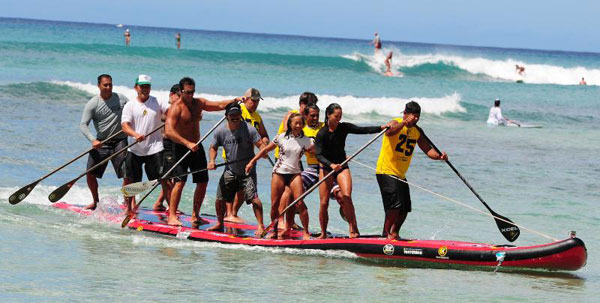 RESULTS:
Surfers shown in order of 1st through 4th, from Hawaii unless noted otherwise.